1. BUDGETARY MANAGEMENT
The State has consistently managed to keep the Revenue Deficit in check and has even attained a Revenue Surplus of Rs.6580 crore in 2018-19. At the same time the fiscal deficit during 2018-19 was 1.47% which was well within 3% of GSDP as stipulated in the AFRBM Act.

2. SOUND CASH FLOW & EXPENDITURE MANAGEMENT
Despite a stringent fiscal management as detailed above, the State has managed to give an average outlay of Rs.88453 crore (BE 2016-17 Rs.78253 Cr, BE 2017-18 Rs.85873 crore, BE 2018-19 Rs.90270 crore & BE 2019-20 Rs.119715 crore) every year over the last 4 years. In this, it is to be noted that the State’s own revenue receipts have gone up from Rs.16433 crore to Rs.22068 crore during 2019-20 State’s own revenues make up 26% of total Revenue Receipts.
Also, the nature of expenditure incurred has undergone a quantitative change where in the percentage of expenditure incurred on asset and infra creation have gone up which can be seen in the fact that Capital expenditure has increased from Rs.6001 crore to 13501 crore during 2016-17 to 2019-20. The State’s revenue expenditure as a percentage of its total expenditure has seen a declining trend in the last 4 years which goes on to highlight the qualitative change in the nature of the expenditure.

3. GROWING STATE REVENUES
Own Revenue has risen in the State in the last 4 years which is indicative of the growth revenue in the State. The GST Collection have gone up from Rs. 5057 crore ( 2017-18 ) to Rs. 9925 crore (2019-20). Assam in fact was the first State to resolve to transition towards GST and has smoothly done so as can be seen in the figures below.

4. OUTCOMES OF SOUND FISCAL MANAGEMENT
Maintaining efficiency throughout, Government of Assam, during the global pandemic of COVID-19, did no deductions in the salaries of employees till now, and also ensured timely disbursement of all pension commitments
Government of Assam also managed to pay dues in all sectors
During the time of COVID-19 pandemic, Finance Department gave its full Budgetary support to the Health Sector by providing vital equipments like ICU Beds with Mattress- es-1000 qty, Fowler Bed With Mattresses-1000 qty, Ventilators-1408 qty, Oxygen Con- centrators-1300 qty, Oxygen Cylinders-4541 qty, BIPAP-207 qty, RTPCR Machine-11 qty, Patient Monitor-592 qty, Finger tip Pulse Oximeter-5950 qty, Hospital Beds with Mat- tresses-3500 qty, ABG Machine-34 qty, Defibrilators-31 qty, Biosafety cabinets-24 qty, Deep Freezer (-80 deg)-10 qty, Deep Freezer (-20 deg )-20 qty
Post COVID recovery, there were apprehensions of a 25% drop in GDP, while GSDP for for the State show a steady increase at 11.21% between 2018-19, 2019-20 at current price and at 6.3% between 2018-19, 2019-20 at constant price at Pan India Level.*
*Projected figures as per the estimates of National Accounts Division, Ministry of Statistics & Programme Implementation, Government of India

TRANSPARENCY:
1. IFMIS (Integrated Financial Management Information System)
To impart transparency and efficiency, Finance Department implemented the system of Online Budget- ing, Online Budget Distribution & Resumption, Re-appropriation, Online Ceiling, Online Salary Bill, e-budgeting etc & is also working rigorously towards full-fledged implementa- tion of Administrative approvals and Financial Sanctions in the State.
The 'Finassam' portal under FMIS has been integrated with CTMIS for better transparency in the Governance.
2. CTMIS (Computerized Treasury Management Information System)
To exercise ease of administration and provide transparency, CTMIS was implemented in the state of Assam
With 188326 nos. of employees registered through CTMIS for collecting monthly sub- scription at the time of passing their salary bill at Treasuries, the system has been en- hanced for full proof functioning of New Pension Scheme (NPS) adopted by GoA.
The Directorate of Accounts and Treasuries has successfully rolled out online processing and payment of salary bills as well as contingency bills for all D.D.O's, throughout the state.

1. Ceiling Management
To bring in complete transparency and ease of administration, the Ceiling Request Process- ing & Monitoring has been implemented across all departments in order to offer quicker and simpler solutions in terms of automated Budget preparation, distribution process and online FOC.
2. e-budgeting
To bring in about ease of administration, transparency and efficiency, the initiative of e-bud- get has been taken up by the Finance Department. Easily available on a mobile app in Goo- gle Play Store, the budget reports will be available in Bilingual languages i.e. English & As- samese & system generated.
3. ASPIRe ( Assam State Public Finance Institutional Reforms )
In order to transform the functioning of Finance, Taxation and Excise departments, mak- ing it more efficient, quick & better service delivery and enhanced transparency, ASPIRe Project was taken up by Government of Assam funded by World Bank.
The project consists of three components:
Component 1: Strengthening Public Finance Institutional Capacity
Component 2: Strengthening Expenditure and Revenue Information Systems
Component 3: Project Management, Monitoring and Evaluation, and Co-ordination
Efficiency in tax administration
Improvement in predictability and transparency in budget execution
Reduction in share of discretionary expenditure in the last quarter of the financial year
Public access to key budget execution reports and procurement contracts awarded
Reduction in cost of collection of tax revenue in Commercial Tax and Excise Departments
Non-GST taxes collected electronically and filing of Non-GST tax return online
4. GeM in Assam (Government e Marketplace)
Dedicated GeM cell has got established under Assam state Public Finance Institutional Reforms(ASPIRe) project to facilitate and support the users from various buyer depart- ments and sellers from across the state on usage of GeM portal and resolving the con- cerns by coordinating with GeM central team at New Delhi.
Launched with version 1.0 and then gradually upgraded to Version 2.0, Version 3.0, GeM is now in version 4.0
Regarding the statistics of the State, currently, the no. of active buyers stand at 240 and active sellers are 11334, with a a volume of 1813, the current value reamins at Rs 495.52 crore
Regular training coducted for buyers and sellers across the state are 147 with participa- tion of 7681 persons
5. Assam e-Procurement
The Government of Assam has notified Assam Public Procurement Act 2017(APPA’17) and Assam Public Procurement Rules(APPR) to make the procurement process in the state more versatile and transparent. Assam is the 4th state in the country who has their own Procurement Act & Rules. 1165 nos. of Department users and 13033 nos. of Bidders are currently registered under the portal Average days taken to complete any open tender has been reduced to 66% in FY 2020- 2with respect to FY 2017-18 In 2017, Assam had received award from NIC, in the fastest growing online procuring state (North-East) category Assam is now one of the leading contributor in the upgradation of the existing GePNIC solution.

EASE OF DOING BUSINESS
1. eGRAS (Government Receipt & Accounting System)
To inculcate transparency and accountability, eGRAS was launched on 1st July, 2018 for collecting all revenue, deposits in the State Exchequer, Assam.
2. Amnesty Scheme for Liquidation of Arrears, 2016
The State Government, with and aim to recover outstanding dues, announced a remark- able scheme i.e. Amnesty Scheme where a no. of outstanding recovery cases were dis- posed and about Rs. 450 crore realized during FY 2016-17.
3. The Assam Industries (Tax Reimbursement for eligible Units) Scheme, 2017
To promote sector specific industries in a given time frame, GoA introduced this scheme with a sunset closure which led to a total of Rs. 669.70 cr, at an average of Rs. 167.43 cr in the last 4 years, being reimbursed to industrial unit.
4. The Assam Taxation (on Specified Land) Act, 1990
To make it more people-centric, Government of Assam, under the Assam Taxation Act, exempted tax payment on green tea leaves for three years w.e.f. 1st January, 2019
This move shall result in net savings that would help them to invest further in expansion of tea cultivation as well as income & employment generation
5. Treasuries & Sub-Treasuries
Over the last four years, a total of 18 Sub-Treasuries have been established
Treasuries established in the following districts - Biswanath Chariali, Sonari, Garmur, Ho- jai, Hatsingimari, Suwalkuchi, Baihata Chariali, Sarthebari, Golokganj, Dudhnoi, Sonapur, Raha, Sipajhar, Bhergaon, Amguri, Moran, Domdoma, Chabowa, Silapathar, Naoboicha, Teok, Jamuguri, Sorbhog.

FOCUSED APPROACH
1. Gender Budget
it embeds gender specific goals into fiscal policies as it comprises of activities and initiatives for preparing budget from a gender perspective 2. Child Budget
it adresses children’s issues , such as poverty, malnutrition, illiteracy or protection . The goal is to ensure priortization of public spending for children from various socio-economic backgrounds.
3. Outcome Budget
it measures the outcomes of all Govt. schemes and whether the money has been spent for the purpose it was sanctioned 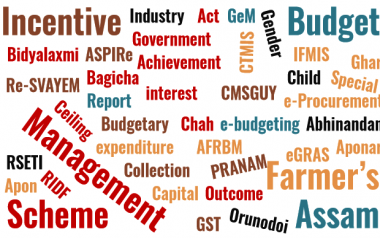